Mr Kumar is often instructed by solicitors due to his tenacity and incisive cross examination skills of witnesses which results in acquittals. His ability to expose contradictions and to discredit police officers and their evidence whilst exposing weaknesses in Prosecution case, ultimately leads to ‘not guilty’ verdicts.

Mr Kumar’s Client (Zaidi) was said to be one of the principal Defendants (this trial involved 6 defendants, whilst the other ‘connected trial’ involved 3 other defendants) in a money laundering operation from a fraudulent sale of house in London. The Prosecution’s case was that £ 250,000.00 of the fraud proceeds was dispersed by the conveyancing solicitors into two accounts, one of the accounts which belonged to Mr Kumar’s Client (Zaidi). The Client faced 9 counts of money laundering charges in a 23 counts indictment which alleged that the fraudulent monies were transacted from his bank account to a number of other individual’s bank accounts.   The Client’s case was that although it was his bank account, he did not have control of it at the relevant time and the transfers was actually done by a co-defendant in the same trial – effectively running the ‘cut throat’ defence. 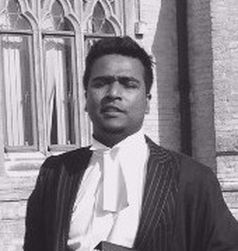 After Mr Kumar’s extensive and incisive cross examination of the co-defendant, the Judge directed the jury to return verdicts of ‘not guilty’ on the 8 counts that Mr Kumar’s Client was facing. The co-defendant was eventually found guilty by the jury whilst Mr Kumar’s Client was acquitted of all charges including the principal charge of ‘entering into a money laundering arrangement’ contrary to section 328 (1) of the Proceeds of Crime Act 2002.

Instructed as led Junior on behalf of the First Defendant. The case involved complex factual issues and legal arguments on admissibility of evidence on NRM.

Allegations of running 10 brothels and control of 3 prostitutes. After trial, Defendant was acquitted of 4 counts which resulted in a much lower sentence than expected (3 and a half years after time served meant 15 months actual imprisonment).

R v Scriven and Others

Mr. Kumar’s client was indicted with 7 others for conspiracy to supply class A drugs (opium) worth millions of pounds.

The client was arrested with 30.5 kilos opium (worth £ 1.1 million) whilst travelling on the M1 by the Serious Organised Crime Squad. The prosecution allegations included that the drugs were picked up after a shipment and that Mr. Kumar’s client was ‘caught red handed’ with the boxes of drugs for what was a nationwide supply operation.Mr. Kumar had to cross examine police officers on telephone evidence as the defence case was that someone else used the phone to make calls involving the drugs trade.

After a five week trial in Kingston Crown Court which involved a cut throat defence, all co-defendants were found guilty by the jury except for Mr Kumar’s client, in whose case the jury disagreed and could not reach a verdict.

In light of the jury’s findings, the prosecution offered no evidence and Mr. Kumar’s client was acquitted. All other co-defendants received custodial sentence ranging from 7 years up to 20 years imprisonment.

Saravanak Kumar has long had an interest in international law and the importance of benefit to be gained in learning from other legal jurisdictions and forging close cultural ties. He is also a door tenant at Kumar Chambers, Malaysia where he had previously advised on large scale fraud cases and civil matters.